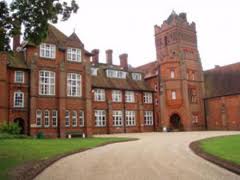 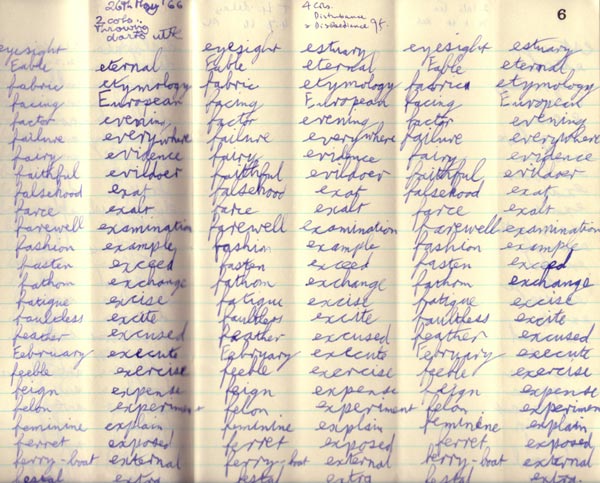 Blue hard back books were issued for Columns.
Columns were awarded for all sorts of offenses like "Throwing Darts" and "Disturbance & Disobedience". What a rebel!
It's just as well they weren't given for bad handwriting. 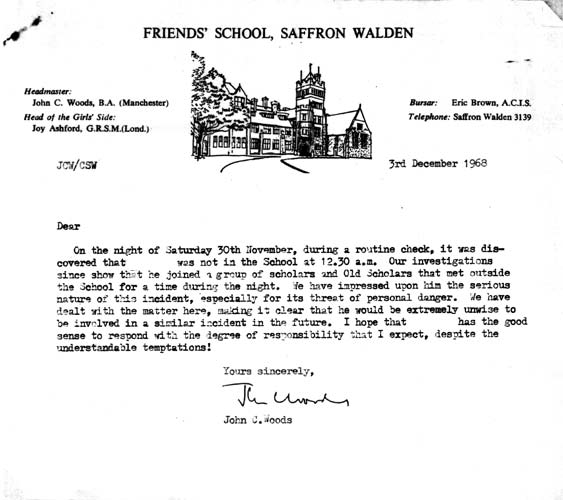 One of the pleasures of the first term in the Sixth Form was meeting, late at night (November 30th 1968), some of those who had escaped for ever the previous summer (I would bet that Jonathan Neville was one of those). But we got caught. Letters home followed.....


Jonathan adds..
Yes, I was one of those! I ferried several folk to the Beeches in my old Standard Vanguard. John Woods suspected me of organising the various nightly exoduses and supplying drugs (totally untrue - I wasn't taking them, let alone supplying them) and as a result I was expelled from the school that I had already left!

All the characters and incidents in this story are imaginary and any similarity between and actual people and actual incidents is unintentional and coincidental.
My mind surfaced from the depths of unconsciousness that it had lain in for the past two hours and formed the question, "What time is it?"
"12.15. Are you getting up?" "No!" My mind slumped again.
"No?" The blurred black head suspended over me sounded disappointed.
"Why not?"
I groaned and dragged myself out of the warm cocoon of my bed.
"Meet you at Brighton Beach," said the boy and slipped through the creaking bedroom door. Daniel and I started dressing. We pulled our limp clothes onto our bodies.
"You'll get caught," grumbled Hank from his bed on the other side of the room. We ignored him, tip-toed out and peered round the door onto the boys' well.
"Hell," I breathed. "Fred's door's open, and the light's on." We stood shivering in the darkness; then, with a boot in each hand, we slithered down the concrete stairs. At the bottom I stepped out into the corridor. I stopped dead, my heart leapt, someone was standing there, looking at me out of the murky gloom of the corridor. Then I realised, the spectre was my own reflection in the glass door.
We padded across the playroom floor. Crammed on our boots. Through an open window. A silent dash over the ashphalt and we were on the muddy, moonlit playing fields. Four shadowy, black figures materialised from around a corner. Things were O.K. Together we set off at a run through the misty darkness.
It was cold, chilling. The grass was crisp and crunchy under-foot and overhead the stars twinkled frostily. We ran. Past the end of the Avenue and then along roads, we slowed and flitted through the pools of light cast by the streetlamps. Some of the houses had square windows glowing but the others were black, silent silhouettes. The silence was complete. Apart from us nothing moved. The six of us scudded along under the misty brilliance of the stars, the air stabbed at our lungs and my boots rang dully over the pavement.
Soon we plunged off the road and floundered along a muddy cart-track. Some trees materialised vaguely in the mist and a small fire glowed redly at their feet. We stumbled and slithered over the mud and through the spiky bushes that tore at our legs. .
The fire was roaring warmly, sending clouds of sparks upwards towards the silver stars. Twenty half-seen people were huddled in a ring round the fire. They were half buried in leaves and faces glowed redly as they reflected the bright glow of the flames.
Everyone talked, joked, ate toast, and listened to a couple of boys hunched up, playing guitars. After an hour, tiredness began to creep over the party, people vanished into the blackness, the fire refused to flame, bodies crept nearer the fire, and conversation began to die. A haggard figure came over to me and we set off for school.
We were tired, and almost slept as we walked. A car flashed past its engine churning the silence in the black darkness. Then we were back on the Avenue. The school was wrapped in vacant silence, it was icy in the crystal star light. We took off our boots and climbed delicately through a window.
On the stairs we split up. I shuffled into the silent bedroom. All was still. We took off our smoked clothes and collapsed into bed. All was well; no one would know of our midnight escapade.
"By the way they had a bedroom check about fifteen minutes after you'd gone." The voice was silent again. I ignored him, and slept soundly.
The next morning the master on duty was unusually happy. Later there were official notes for us on the board. A short ticking off. A week of early beds, and a letter home to our parents.
Ah well, it happened to the best of us!